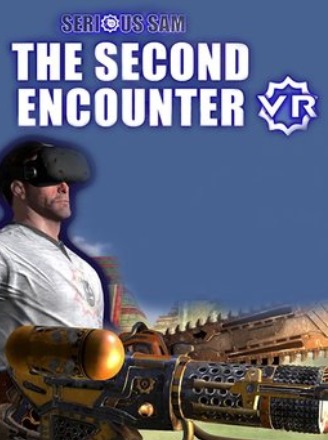 NOT ANOTHER SINGLE-WEAPON GAME
Keyboards are for typing, so keep your fingers off. Grab a weapon, one for each hand, and boost your stopping power with Sam's new toys: Sniper Rifle, Flamethrower and Chainsaw! Use different weapon combinations or dual-wield two of the same to defeat Mental or use your arsenal in a deathmatch against "flat peasants".

OLD-SCHOOL, BUT NICE AND SHINY
Visit South America, ancient Mesopotamia and Medieval Europe, uncover over 130 hidden secrets and lose yourself in one of the most impressive VR experiences yet, all powered by the latest Serious Engine 2017.

FULL BLAST SINGLEPLAYER ACTION
Go back through time and use all of the available firepower to go head to head against five new enemies and three nasty bosses. Choose between five difficulty settings that can satisfy everyone - a gentle flower looking for some casual fun or a death machine ready to spread mayhem in virtual reality.

PICK YOUR POISON
Plunge into chaotic 16-player versus multiplayer modes, some unique and others based on campaign levels, or enjoy the classic co-op action in a 12-level cooperative campaign mode featuring several difficulty settings, increased enemy strength (based on player count), friendly fire/infinite ammo options, and much more. Play the entire co-op campaign in classic 80's arcade style with limited lives.

These are a list of features that we applied to this game.

Published by Devolver Digital and Croteam.

Spread the word about Serious Sam VR: The Second Encounter with friends, family & others.

Serious Sam VR: The Second Encounter is part of the

PRICES START AT:$27.99+
UP TO 53% OFF
SPOTLIGHT
Mass Effect: Legendary EditionReleased 14th May 2021
GAME SUGGESTIONSOther horror games you might like
VIEW ALL Horror GAMES

PRICES START AT:$2.49+
UP TO 79% OFF
Middle-earth: Shadow of MordorReleased 30th September 2014
GAME SUGGESTIONSOther monster games you might like
VIEW ALL Monster GAMES