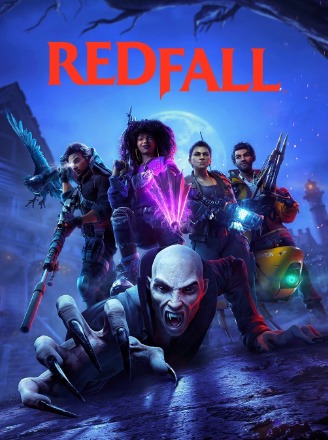 RedfallUPCOMING
To Be Announced, this game is unavailable.
Add to Game Library0Add to Wish List0Follow0
About User & Critic Reviews Buy (Compare Prices)
What It's All About About Redfall
Redfall is an open-world co-op FPS from Arkane Austin, the award-winning team behind Prey and Dishonored. Continuing Arkane’s legacy of carefully crafted worlds and love of creative game mechanics, Redfall brings the studio’s signature gameplay to the co-operative action and FPS genres.
WELCOME TO REDFALL
The quaint island town of Redfall, Massachusetts, is under siege by a legion of vampires who have blocked out the sun and cut the island off from the outside world. Trapped with a handful of survivors against diabolical enemies threatening to bleed the town dry, choose your hero from a diverse roster, grouping up with others to create the perfect team of vampire slayers.

SLAY TOGETHER
Redfall blends single and multiplayer options seamlessly, allowing the player to venture into the darkness alone or to squad-up with up to three friends for four-player co-op. Teammates can try different hero loadouts and combine their strengths to overcome the vampire legion and their brood of maniacal followers.

REIGN IN BLOOD
Redfall’s vampires aren’t your typical bloodsuckers. They were created after a scientific experiment went horribly wrong and are continuing to evolve. After their transformation, some vampires develop powerful abilities and grow into bigger and badder vampires. But they’re not the only thing standing in your way – players will also face off against the human cultists who worship the island’s hungry new leadership with the hopes of joining their ranks.

Spread the word about Redfall with friends, family & others.

Redfall is in your Game Library.

Some Random GamesOther Games You Might LikeVIEW A RANDOM GAME