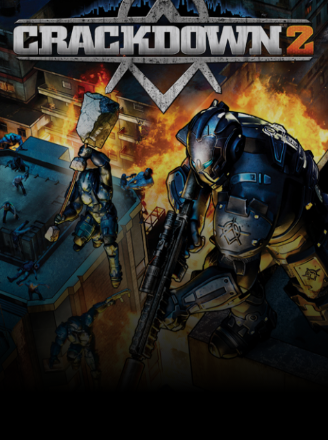 Crackdown 2
Released 6th July 2010, this game is free to play.
About User & Critic Reviews Buy (Compare Prices)
GAME INFORMATIONAbout Crackdown 2
Crackdown 2 is an open world action-adventure video game developed by Ruffian Games and published by Microsoft Game Studios. It was released on Xbox 360 in July 2010 and is a direct sequel to the 2007 video game Crackdown.

Crackdown 2 is modeled similarly to its predecessor Crackdown, a third-person shooter in open world game play. The player character is an advanced super-powered officer for the city-funded "Agency", known simply as the "Agent". This time around, players choose one of four faces and armor colours (eight colours if they pre-ordered it), instead of just the preset heads offered before. Along with that, the orbs have been carried on from the first game, and the Agent's powers are expanded and enhanced such as the Agility Skill which now allows the Agent to jump higher than in Crackdown, glide, and gain access to the helicopter landing pad at the Agency Tower. The player is able to commandeer any number of vehicles in the game, including Agency vehicles, Peacekeeper Cruisers and a large number of civilian vehicles that the Cell have armor plated. Checkpoint races are back, both Road and Rooftop versions. Like Crackdown, the game allows for on-line co-operative play in the main game, but now supports up to four players. The game also features competitive multiplayer modes for up to sixteen players. While the Crackdown supported System Link playing for co-op, Crackdown 2 does not feature the same option.

Microsoft Producer Peter Connelly stated: "It would've taken a half-day of work, for something that only a tiny percentage of gamers will ever use." In Crackdown 2, the player fights both the Cell, a terrorist organization, and "Freaks," strange infected mutants. Both organizations' members can be killed with melee attacks, explosions, and bullets but there are special UV weapons made for the Freaks, who cannot survive in sunlight. There are five skills to be leveled up: Agility, which the player increases by collecting Agility Orbs and Renegade Agility Orbs, by doing Rooftop Races, or by killing enemies from a highly elevated location; Firearms, which is increased by shooting both handheld and mounted guns; Driving, which is increased by running enemies over, power slides, handbrake turns, completing Road Races, jumping through Stunt Rings and collecting Renegade Driving Orbs; Explosives, which is increased by using explosives, both Launchers and thrown Grenades; and Strength, which is increased by using hand-to-hand attacks, throwing objects, beating people with those objects, or using the moves you unlock as your Strength increases, such as the Charge or Ground Slam.

These are a list of features that we applied to this game.

We're here to help you make the right choice when buying video games.

How do I buy/download Crackdown 2?

Visit the "Buy (Compare Prices)" tab above (or click here) to see a list of offers from all retailers then use the filters to narrow down your search and select your desired editions & platforms (for help activating the game read this thread). When you find the right offer simply click it and you will be redirected to the retailers' website where you can purchase the game and get your product key.

NEXARDA™ will help you find the best deal for Crackdown 2 at the lowest possible price from 80+ trusted retailers. You can choose to buy from Official Stores, Key Sellers or Marketplaces (for a list of all retailers visit this page).

Can I save Crackdown 2 for later (to buy when the price is lower)?

Yes! You can do this with a NEXARDA™ account - all you need to do is create an account with us and once you're logged in you can add Crackdown 2 to your Wish List and buy it at a later date when the price is better for you. You can see your entire Wish List right here.

What is the age rating for Crackdown 2 (for parents)?

You can find the age ratings above if the game has any (we might not have all age ratings so you can check on the following websites: ESRB, PEGI, USK, CERO and ACB). Please note that age ratings are different in each region - for example ESRB is used in the United States.

Spread the word about Crackdown 2 with friends, family & others.

Crackdown 2 is part of the

NO PRICES FOUND...UNAVAILABLE
UPCOMING
Anew: The Distant LightTo Be Announced