About League of Legends

League of Legends (abbreviated LoL) is a multiplayer online battle arena video game developed and published by Riot Games for Microsoft Windows and macOS. The game follows a freemium model and is supported by microtransactions, and was inspired by the Warcraft III: The Frozen Throne mod, Defense of the Ancients.

In League of Legends, players assume the role of an unseen "summoner" that controls a "champion" with unique abilities and battle against a team of other players or computer-controlled champions. The goal is usually to destroy the opposing team's "nexus", a structure which lies at the heart of a base protected by defensive structures, although other distinct game modes exist as well. Each League of Legends match is discrete, with all champions starting off fairly weak but increasing in strength by accumulating items and experience over the course of the game. The champions and setting blend a variety of elements, including high fantasy, steampunk, and Lovecraftian horror.

League of Legends was generally well received upon its release in 2009, and has since grown in popularity, with an active and expansive fanbase. By July 2012, League of Legends was the most played PC game in North America and Europe in terms of the number of hours played. As of January 2014, over 67 million people played League of Legends per month, 27 million per day, and over 7.5 million concurrently during peak hours. League has among the largest footprints of any game in streaming media communities on platforms such as YouTube and Twitch; it routinely ranks first in the most-watched hours. In September 2016 the company estimated that there are over 100 million active players each month. The game's popularity has led it to expand into merchandise, with toys, accessories, apparel, as well as tie-ins to other media through music videos, web series, documentaries, and books.

Here are the system requirements for League of Legends (thanks to PCGameBenchmark.com). 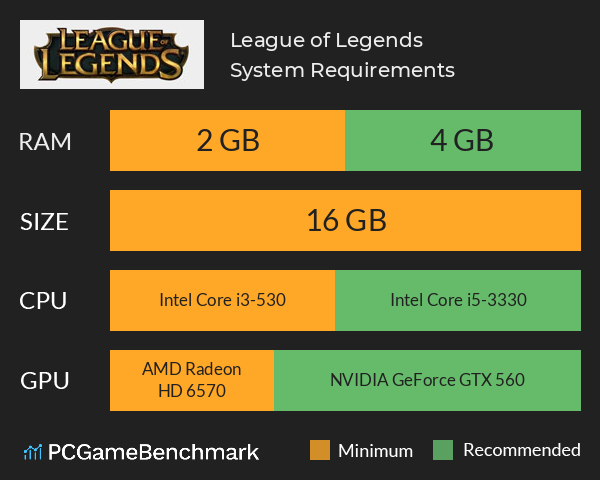 Write A Review For League of Legends

League of Legends (abbreviated LoL) is a multiplayer online battle arena video game developed and published by Riot Games for Microsoft Windows and macOS. The game follows a freemium model and is supported by microtransactions, and was inspired by the Warcraft III: The Frozen Throne mod, Defense of the Ancients.

League of Legends is part of the

NO PRICES FOUND...UNAVAILABLE
The Elder Scrolls Online: ElsweyrReleased 21st May 2019

Empires of the UndergrowthReleased 1st December 2017