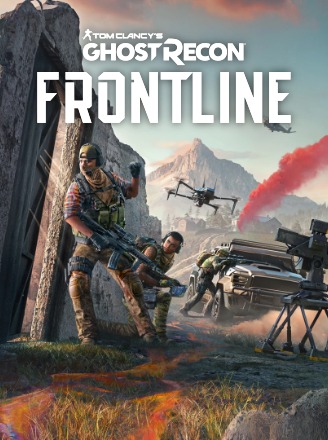 Ghost Recon FrontlineUPCOMING
To Be Announced, this game is unavailable.
Add to Game Library0Add to Wish List0Follow0
About User & Critic Reviews Buy (Compare Prices)
What It's All About About Ghost Recon Frontline
Tom Clancy’s Ghost Recon® Frontline is a free-to-play, tactical-action, massive PvP shooter grounded in the renowned Ghost Recon universe. The game features an advanced class system and large set of tactical support tools, allowing for complete freedom in strategic gameplay, with multiple ways to outsmart enemy teams and win each match.
Build your roster of elite contractors from all around the globe. Explore Drakemoor Island, a massive and hostile open world that demands quick adaptation and teamwork to survive. Join forces with your friends through full cross-platform support and enjoy fun and collaborative competition across various game modes.

Think strategically and stay one step ahead: work with your squad, deploy various field support abilities and adapt to every situation by switching between contractors from your roster. Turn the tide of battle and overcome your opponents in each game mode, including epic 100+ players battle in the flagship mode, Expedition.

UNBOUND TACTICAL FREEDOM
Because there are multiple ways to win each match, it is entirely up to you what kind of strategic approach you take. Adapt to an evolving battlefield by calling on tactical reinforcements, such as deadly auto turrets, smoke screen drones, and massive barricades.

Tom Clancy’s Ghost Recon Frontline is a tactical-action game where split-second decisions are essential. The battlefield is yours to control as these unique features encourage strategic choice and empower players to try different approaches. No two matches are ever the same. Think outside the box, combine skills, adapt, and outsmart enemies your way.

CLASS-BASED SQUADS
Team up with players from all around the world, across platforms through an impactful and diverse class system where each class is highly specialized, filling in distinct tactical roles.

Progress through the game via an advanced unit system, upgrade and customize each contractor to fit your strategy, and even choose different skill paths to unlock within each class. Socialize with your friends and build powerful synergies through different compositions of contractors and their complementary abilities.

MILITARY IMMERSION
Tom Clancy’s Ghost Recon Frontline is a brand-new take on the franchise, and the first in the series to introduce massive PvP experience with full cross-platform support. The game features an immersive, full first-person perspective, while staying true to its fundamental values of teamwork, strategic gameplay, and high military authenticity.

EXPEDITION MODE
The game offers various game modes, from quick and casual to highly tactical. Featuring 100+ players in teams of three, the flagship Expedition mode is the ultimate test of teamwork: it includes dynamic objectives strewn across the massive open map with no converging circle, where players must work together and utilize their combined skills in order to call for extraction.
Use different abilities, call down tactical supplies, switch between units, adapt and showcase exceptional teamwork while competing with others.

Here are the recommended system requirements for Ghost Recon Frontline.
Please note: download sizes, operating systems and other requirements vary depending on platform.
We advise looking at the requirements from where you buy/activate the game.

Spread the word about Ghost Recon Frontline with friends, family & others.

Ghost Recon Frontline is in your Game Library.

Ghost Recon Frontline is part of the

Ghost Recon Frontline is part of the

PRICES START AT:$12.99+
UP TO 35% OFF
Curved SpaceReleased 29th June 2021
You Might Like TheseMore Military GamesVIEW ALL Military GAMES

PRICES START AT:$0.96+
UP TO 80% OFF
HomefrontReleased 14th March 2011
Some Random GamesOther Games You Might LikeVIEW A RANDOM GAME